I have heard "creativity" described as be ability to see something and then to take that idea, put your own spin on it, and make it your own. I like that description of creativity because if it's not true, I'm not very creative. I love making things, but very few of my ideas originate from me. Some of them wouldn't be recognizable as coming from a certain idea, but recognizable or not, something has to give my thoughts a nudge that sends them spinning off in a thousand creative directions.

Bogging has been very good for my creativity. The wealth of marvelous ideas being posted daily is mind-boggling. I've had to learn to curb my excitement and carefully pick and choose which of the wonderful ideas out there I really and truly want to adopt and remodel.

One of my favorite places to pick up ideas to make my own is over at thimbly things. The two projects I'm sharing in this post originated from there and underwent very few alterations. 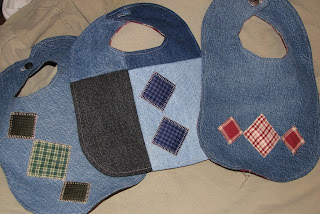 I loved her idea to make baby bibs from denim. I had just been thinking about how I was hoping to get all new bibs for Brother since Little Man's bibs are all yucky and stained, when Kristena posted about making bibs from denim. I fell in love with the idea and promptly began about two dozen: some for Brother and the rest for gifts. (Remember my comment about having to limit the number of ideas I adopt? I think I should also work on moderation in the few that I do adopt.) The three that are pictured here I used for gifts at a baby shower a few days after I read the original post. The rest are still works in process.

My variation on this idea was to make some of the bibs of several squares of denim pieced together. My mom was happy to let me raid her stash of already-cut squares for a denim quilt, and I was happy to accept her offer. I also decided to do appliques instead of ribbons since ribbons are hard to make boyish. I have even more cute ones in the works that I'll probably be finishing, photographing, and posting about soon. 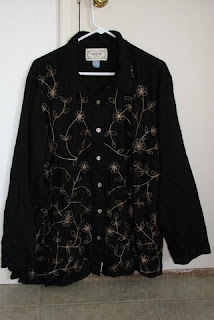 The other idea I recently adopted from Kristena was a remodel of a big, old fashioned shirt into a cute little modern top. I saw her version and decided that with a few alterations it would make an adorable maternity top, so I started looking for something that would work on my thrifting expeditions.

This is what I found. It was a 4X shirt made of gorgeous black rayon with brown embroidered flowers on it. I would probably never have been willing to pay for the fabric at the fabric store, and the shirt seemed almost new. I was excited. 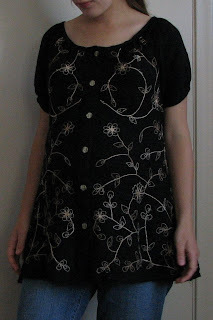 To alter it, I relied fairly heavily on a maternity pattern I had on hand. The only seams I ended up keeping were the hem and the button placket since I wanted to make the sides slant out in a maternity-ish way. I added ties for the back (cut from extra fabric from the formerly long sleeves) in my new side seams. I used the pattern to cut new raglan sleeves from the original sleeves, and I finished off the shirt by gathering and binding the neck and sleeve hems. My description feels a little scatterbrained, so if you like the idea, I really would reccomend reading Kristena's post too. 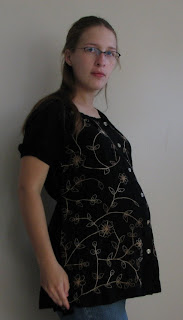 On a side note, I set up my mini-tripod, read a portion of the poorly written instruction manual for my camera, and figured out how to take timed photos with my camera so I could take photos of myself for this post. I'm very, very pleased that I finally took the time to figure it out. ; )
Entry by Christina at 8:51 PM

sweet! i'm glad the automatic photo thing worked for you.

Love both of your projects. Thoses denim bibs are going to be so practical! I love just about anything denim. (except jumpers :))

Hey Christina! How did I not see this post before??? I love all your makeovers! Super-cute shirt!!! I'm so glad to be an inspiration, and I'm sure that you're likewise inspiring women with your creativity too! :)