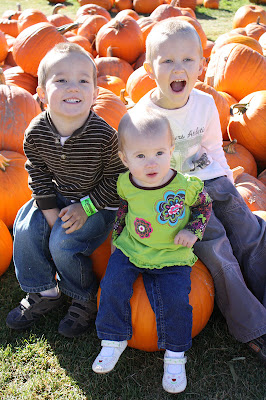 Normalcy, of course, is a relative term.

We had a fabulous trip:
concert going
(Benjamin and I discovered a new group, got pictures with and autographs from some of our favorite musicians, and generally enjoyed being slightly irresponsible together going to concerts two nights in a row.)
restaurant dining
(We went out on a limb and ended up discovering an amazing hole-in-the-wall Vietnameese restaurant.  Turns out Thai coffee is fabulous, and of course Coldstone Creamery is always a sure bet.)
thrift shopping
(Horay for big-city selection!)
golfing
(Ben and his dad apparently enjoyed an amazing round of autumn golf at a course in Parley's Canyon that they've been wanting to try for a while.)
autumn festival enjoying
(My sister-in-law and I took my three little ones and the baby she nannies out for a fun-filled morning of hay rides, bouncy houses, mazes, rubber duck racing, pumpkins, and more.)
and just hanging out
(Playing games and having movie night with Ben's parents, getting together with his uncle and aunt, cooking and eating yummy food, going to girls' night at my sister-in-law's place, chasing the cat, and lots of time for grandchildren/grandparent interaction.) 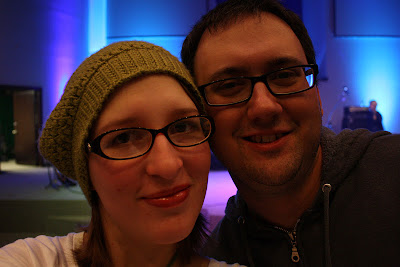 We came home and (with the exception a few days battling an icky cold), I've been busy, busy ever since.  In addition to the normal stuff like appointments, laundry, and dishes, I've been enjoying doing lots of baking and breaking in my new crock pot, doing a photoshoot, working on another handmade Christmas gift, and making a custom wedding vows calligraphy.

That said, I definitely have stuff to write about, but I have to find time to actually sit down and put my fingers to the keyboard.  I still don't have a laptop, and Little Man has officially dropped his afternoon nap, both of which leave my blogging routine, well, non-existent.  It's okay, though. I'm really loving the stage of life even if it leaves me breathless half the time.
Entry by Christina at 4:33 PM

I'm so glad you had a wonderful time! A busy mom absolutely has to get out and have a change of pace once in a while. It just breaths fresh life into the normal. :)