It's been ages since I've done any recipe reviews!
I feel rusty. 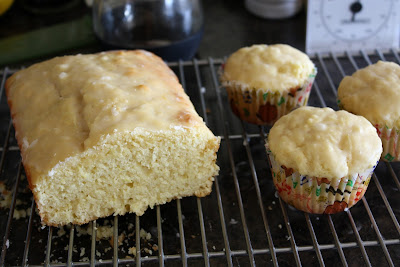 The recipe: Lemon-Zucchini Loaf with Lemon Glaze. I saw this recipe on Pinterest and decided that it would be the perfect way to use some of the zucchini and lemons from our Bountiful Basket.
The mods: (Because I can never seem to just make the recipe likes it's written). I peeled my zucchini (I was making it for Little Man's preschool class and didn't want any of the kids to freak out about the green flecks in their "cupcakes."). I also used plain yogurt instead of buttermilk and tripled the recipe. (I had a lot of zucchini!)
My impression: I ate more than half a loaf all by myself. Do I need to say anymore? : )  You should try it. Really. However, I do recommend sticking to the loaf version instead of trying to make muffins. The bread was moist with a texture reminiscent of pound cake, while the muffins were just crumbly. 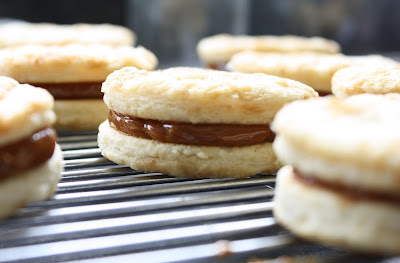 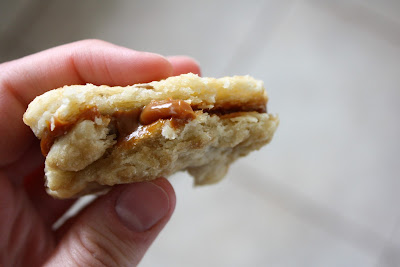 The recipe: Alfajores are apparently a South American treat. Having lived in Brazil, I'm pretty much crazy about anything that contains Sweetened Condensed Milk. (I love that intensely sweet, subtly complex, smooth flavor gliding over my tongue. Sometimes I just eat it with a spoon. True story.)
The mods: I used a can of Dulce de Leche that I bought at the store instead of making my own. Why complicate things? I also used brown sugar instead of the sanding sugar and halved the recipe.
My impression: Um. Wow. I'm definitely making these again. And I definitely need to do a better job sharing when I do. These are the most-nearly-perfect cookies I have tasted in a loooooong time.
Entry by Christina at 4:06 PM

I broke my diet for these cookies. Twice. Another true story.

All that Glisters is not Gold said...