One treasured tradition that I did not have to make do without this year was Christmas baking! Oh, how I love searching for recipes, finding the perfect ones, and concocting tempting confections. I did decide that it would be wise to strictly limit myself, though, to three kinds of cookies and two kinds of candy.

And it almost worked. I just "had" to make three types of candy, but I did stick to three kinds of cookies.

I started out by making white chocolate fudge. It was surprisingly simple and oh, so tasty! I substituted toasted chopped cashews instead of the pecans since they were what I had on hand, and they were still amazing, so I imagine you could play around with the nut selection. (I'm thinking pistachios and dried cranberries for next year!) 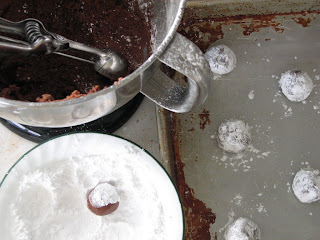 I also made Chocolate Crinkles, yummy chocolate cookies posted by Kate. I think they are like two-bite sized brownies, but my husband says they're not quite like brownies. These will definitely be on my make-again list, and I probably won't wait until next Christmas, either!

I attempted to make some mint meringue cookies, but the egg mixture was a total flop: goopy and stringy instead of fluffy and light. So, I added a bit of shortening and some baking powder and flour. They ended up being thin, crispy minty cookies, which while not what I was aiming for, worked well enough. 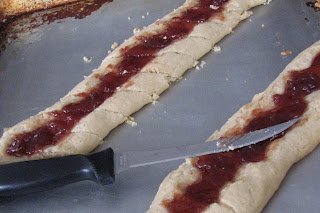 My third kind of cookie was one of my long time favorites, Split Seconds. They are so pretty yet so easy and quick!

My second kind of candy was Brazilian Brigadeiros. Another super-easy, very yummy recipe. (Sorry I don't have a photo of them!) 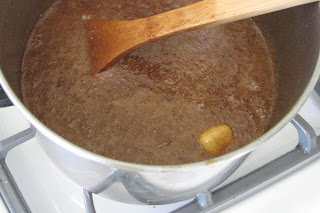 And last, but not least, I made penuche! Penuche is a German brown sugar fudge that is unbelievably sweet, that is, until you see the ingredient list, then you can believe it. The first time I ate it, I "fell in love" with it, and every Christmas since, I've made it!

I am going to share the recipe that was passed on to me by my mother-in-law. She has carried on the line of penuche-making-tradition from her great-grandmother. And now I get to be a part of this sugary heritage. Anyway, here's the recipe. My comments are in brackets.

Use big pan! [This is really important! The sugary mixture takes up much more space when boiling]. Combine sugars, milk and syrup. Bring to a boil and cook for 12 minutes or to the soft ball stage. [If you live at a high altitue like I do, look up a list on candy-making temperatures: the desired temperature goes lower the higher you get.] Remove from heat and beat till very thick. [I usually let it cool until it is 110 degrees before beating it so that I won't wear me and my mixer out by needing to beat it for ever.] Add butter, nuts and vanilla. Pour into buttered cookie pan and cut while still warm. [That's a 9x13 pan, by the way. My penuche always turns out much softer than my mother-in-law's does, so I have to wait until it's cool to cut it, then I have to take it out of it's pan, turn it over, and let it sit over night. Keep an eye on yours to see when the best time to cut it is.)
Entry by Christina at 9:24 PM