The second dress I decided to alter was a more-than-floor length dress (I had to wear it with at least three inch heels) that I bought two February's ago to wear for our Valentine's date. Since I was three-and-a-half months pregnant with Brother, neither my dressy normal clothes nor my dressy maternity clothes fit well. Naturally, when I found this dress second hand for a good price, I happily snatched it up. I enjoyed wearing it for that Valentine's date, but I haven't worn it since. When I began to contemplate shortening the dress discussed in dress refashion #1, I decided to change this one too. 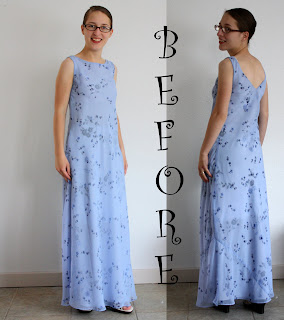 And once again, just in case you're interested, here is a list of the alterations I did:
1. When trying it on, I noticed that the back had an odd little pucker of too much fabric while the front was a little too snug. Since there are no darts in this dress, I decided to try it on backwards. Voila! Both the front-snugness and back-pucker were fixed, and it fit me better than it ever had before.
2. I decided that I didn't want to try to hem the chiffon, so instead of cutting off the bottom of the dress to shorten it, measured and cut a section out of the middle of the dress. I figured that empire waists are "in" right now, so making the dress have an empire waist would work.
3. I lightly gathered the bottom skirt section, and attached it to the bodice section. I sewed the seams wrong sides together.
4. Yes, you read that right. I planned it that way so that the inside would be smooth and un-itchy. I then attached a white ribbon around the empire waistline. This took care of two things at once: it added a touch of white so that I can wear the dress with a white tank top (the V back was just a bit too low for wearing in the front) and it provided a smooth, clean finish over the ugly and potentially itchy raw edges.
5. Finally, I ran elastic through the little pocket between the ribbon and dress so that the dress would be more fitted without demanding the addition of a zipper.
6. The very last step was making a white ribbon bow pin and putting it on the dress at the waist line. 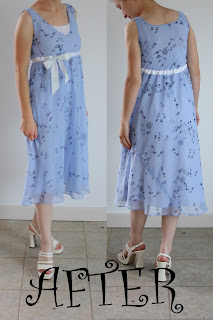 I planned for it to be a little shorter than it is, but I think I like it just fine the way it is. It is light, shorter, and more casual. There's only one problem. It...ah...just seems to scream maternity dress to me which would be fine if I was about six months pregnant. Since I'm not, though, I feel a little sad that I won't be able to use it this summer. 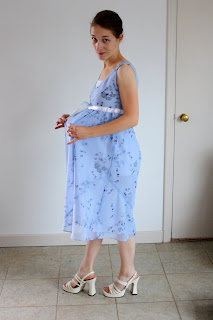 See? Just look at all that room! I guess I'll tuck it away for the next time I'll need extra room and find other cute clothes to wear this year.
Entry by Christina at 2:30 PM

A lot of dress styles now look maternity. It was great last summer for me because most of my dresses fit for so long. But now I don't like wearing them since last year I had a bump.

you could add darts and remove a lot of the fabric to make it a wiggle dress? much more flattering!

I've removed the middle from a couple of dresses and been very happy with the results. I think if you removed some of the width from the skirt of this one you would too.

If you decide to do this on another dress you will likely be happier if the bodice is a bit longer. The dress will look slimmer, and less maternity, if the seam is a bit lower. (To find just the right location try on the dress and tie a string around your ribcage.)