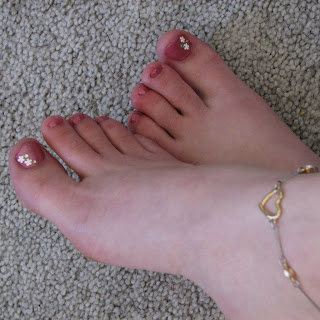 Here's a quick run-down of the recent happenings in our family.  I'm afraid they're not quite in the right order, but you'll get the idea.
~It's finally warm enough for sandals, capris, and ankle bracelets!  Our eight inches of spring snow melted in about three days, and the weather since then has been gloriously warm, sunny, and cloudless.
~We have been indulging in long walks (for a one-and-a-half-year-old, at least) and pleasant trips to the park.
~I had a little contraction scare and had to go to the doctor who couldn't figure out what was going on.  Thankfully they seem to have stopped.
~My husbands parents and sister came and spent the last part of the weekend and the first part of the week with us.  We enjoyed yummy food, fun games, and lots of doting on Little Man.
~Benjamin wrote a new song.  It's beautiful.
~He also went away on a retreat type thingy for two nights.  We were apart for the first time in our married life.  It was really, really rough and I didn't sleep well.
~I dog sat for an adorable little puppy named Maverick for three nights.  Little Man loved him and was all excited about playing with Ma-ma (the short "a" sound distinguishes it from Mama, which is what he calls me).
~We had plumbing problems and I couldn't do dishes for a couple of days and laundry for about a week.  Guess what I'm going to be working on... ; )  Thankfully Benjamin's dad was able to help him get the icky clog out while they were visiting.
~Little Man is learning which letters say what sounds.  I'm very proud of him and think that he just might be extraordinary.
Today I'll be teaching music and tidying my house.  Hmmm...and I need to come up with something for dinner.
Entry by Christina at 9:41 AM 2 comments:

Last weekend was simply beautiful! We had sunshiny weather, warm temperatures, no snow, and very little wind. It was truly an amazing combination for early April in Montana.
On Saturday, Benjamin decided to tackle some outdoor projects. One of the projects was digging out some posts that were no longer necessary since we are planning on extending our garden and no longer need the division between the gravel and dirt. 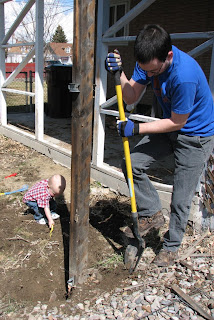 Little Man, of course, wanted to help do man work and wasted no time getting in the middle of things. He helped dig holes with his own little shovel. And then he did some exploring around our car port. 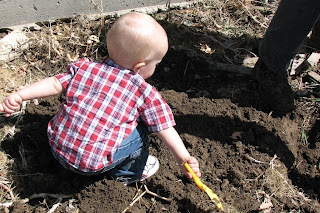 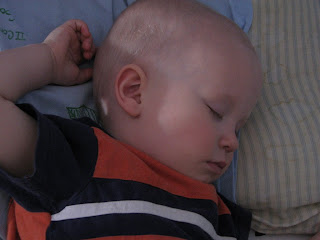 I think that this just might be the best roasted potato recipe I've found yet, and believe me, I was extremely partial to the last roasted potato recipe!  That's not to say that I won't make the old one sometimes, but this one has a more mellow, ballanced flavor.  Plus my husband likes it better, which is excellent reason to make it again!  Here is the recipe (I've tweaked it here and there to make it distincly Christina-ish).

~Roast, uncovered, in the preheated oven until the potatoes are tender and golden brown and the water has evaporated, about 1 1/2 hours. Stir the potatoes every 20 minutes as they bake, adding more water as necessary to prevent sticking. Allow the water to evaporate during the final 15 to 20 minutes of cooking, but be careful that the potatoes do not burn.

~Enjoy!
Entry by Christina at 3:41 PM No comments:

my hope is in God
the Creator
the Almighty
He gives beauty for ashes
He specializes redeeming destruction,
ugly, useless, hopeless
He turns what is hideous to beauty
what is destroyed and warped to a useful vessel
what is hopeless to hope
He has redeemed me
changed me beyond recognition
that's how much He loves me
a miracle
and now I see Him changing them
giving them beauty as they turn from their selfishness and pride
working hope, hope in Him, where hope was lost
a miracle
i prayed for this miracle
my faith was small
like a mustard seed
but God takes tiny faith
and amazes
with the grandeur of His power
and the wonder of His work
as He responds to that prayer
a miracle
i am joyfully humbled and rebuked
Lord, increase my faith
Entry by Christina at 9:34 AM 3 comments:

Labels: on the serious side

i see them hardening their hearts
disobeying Your loving commands
not caring whom they hurt
whom they damage in this hideous crossfire
i understand Your grief
grief over hardness of heart
in a way I never have before
You want to give them good things
beauty
peace
joy
they refuse it
i grieve
but not as You grieve
over the destructive choices made
Lord, keep me
help me to be broken before you
to live in godly humility
not lifted up in pride, thinking i am standing strong
when really i am oh so frail
Lord, give me wisdom
help me to choose Your ways
to observe with Your righteousness
to triumph in Your truth
to love as You love me
to be filled with Your peace
Entry by Christina at 12:39 PM 2 comments:

Labels: on the serious side 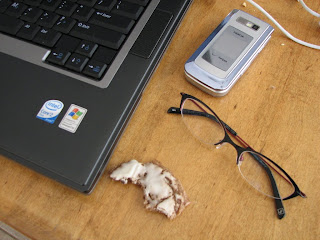 It started last night.  I was going to make home made oreos as Summer suggested here.  I found a simple chocolate cookie recipe and dove in.  But it didn't look like it was going to be chocolaty enough for my taste, so I decided to add some instant coffee for more flavor.
Then as they were baking, I was going to whip up some cream cheese filling.  Easy, right?  No need to use a cook book...  I spontaneously decided to add some melted white chocolate chips.  It was decidedly glazy, and insisted on staying glazy even after the addition of much more powdered sugar.  So I added some vanilla and let it be a glaze.
The result?  Amazingly delectable, addicting cookies.  That's why the picture is of a half eaten cookie instead of neat rows of beautifully baked ones.  It's the last one. (gasp!)  Well, I take that back.  There are more in the freezer, but they aren't glazed.
I'm supposed to be washing dishes.  But I'm blogging instead.  Another change in plans.  I think I have spring fever!
Entry by Christina at 1:12 PM 2 comments:

The sun is shining, the Spring wind is blowing, it's around 40 degrees (Fahrenheit), and the snow is melting! Spring is coming after all! (I was beginning to feel rather hopeless after a few 10 degree nights and cloudy, snowy days.) I have painted my toe nails, and I finished two new springy maternity tops. It's still too chilly to wear my sandals and new shirts, but I know I will be enjoying them soon enough. 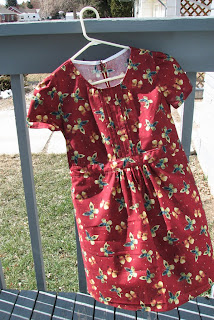 The first shirt is a combination of something I saw someone
wearing at our local farmer's market last summer, a couple of ideas of my own, and a shirt I saw on Motherhood Maternity's site. I made sketches, thought, thought, thought, and significantly adapted a maternity pattern I had on hand. After some trials and errors (late night designing and sewing isn't often a very good idea for me) this is what I came up with. 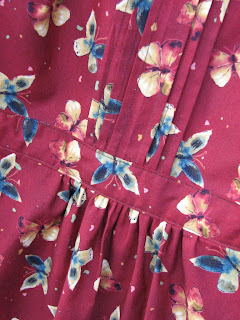 I found the fabric on the clearance table at our local quilt shop for only
$2 a yard and bought two yards. I barely had enough fabric and had to use my happy-accidenting skills several times as I made a few cutting mistakes. But it all worked out, and I'm so pleased with the result. I love the how springy looking the butterflies are. And being an autumn colors person, I love that they are in autumn colors. 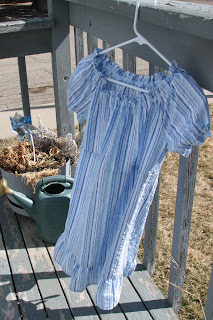 This shirt is made of some stripy blue sear-sucker material I found on the Joann's clearance rack a few months after Little Man was born. I envisioned it becoming a maternity shirt from the start (my very obliging husband gave me a slightly odd look when I declared my intention in the store and bought it for me), and I tucked it away.
After my adventures in designing the previous shirt, I followed Simplicity pattern 5756 pretty closely. I thought it would suit the fabric perfectly. The only change I made was to add a little ruffle on the bottom, another idea gleaned from Motherhood Maternity's site. I like it. It's girly without being fru-fru, and the ruffle makes the shirt longer than the pattern originally was, which in this case is good.
My yard and planters look a little sad, don't they? I'm looking forward to being able to get out and do some yard/garden work, and I'm hoping my bulbs will be pop up and bloom soon!
[grrr...I just can't get my photos and text to format right. If my smart, html knowing husband was here he would help me, but since he's not I'll have to let you figure out which paragraphs the photos go with!)
Entry by Christina at 12:17 PM 2 comments: 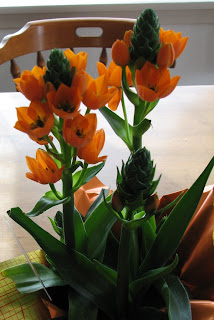 Flowers from Benjamin. There are none outside, but he brightened my day by giving me some for inside. They are South African Sun Stars and are perennial bulbs. I hope I can help them bloom again. They are orange and came in a purple basket. I love orange and purple together. He knows me well. I'm thankful for him!
Entry by Christina at 12:14 PM 3 comments:

Fearfully and Wonderfully Made

On Monday we had the privilege of going in and getting an ultrasound of our baby.  I am at 20 weeks (half way!) today, and while I am increasingly aware of Baby's presence as the kicks and stabs increase in frequency and strength, it is unspeakably wonderful to be able to see Baby moving on screen.
We are as certain as possible that this is another boy.  He was not shy in the least and we saw the evidence several times. ; )  I'm happy.  Little Man will have a Brother.  They will be able to share a room, and I will be able to once more use and enjoy all those cute little boy clothes I tucked away. 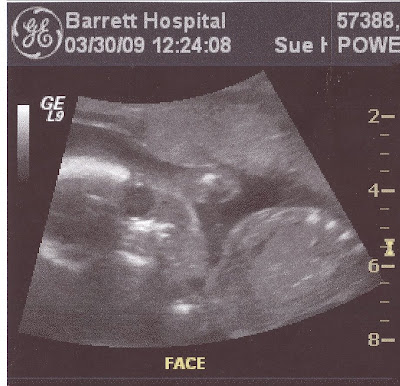 Brother was quite cooperative when it came to taking the important photos of his organs.  The technician was able to get some beautiful shots of his little heart, spine, and kidneys, but he was camera shy and kept hiding his little face.  This is the best face shot she could get.  I think he looks a little bit like Little Man, but definitely not the same. 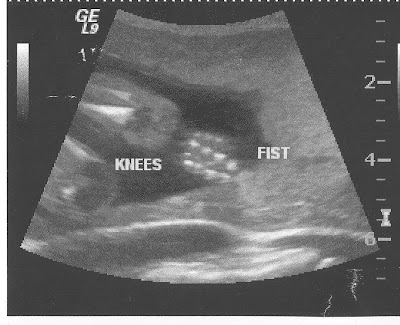 Here is a photo of his little knees and hand.  He is about 11 ounces right now.  I can hardly wait to meet him!
Entry by Christina at 11:37 AM 2 comments: