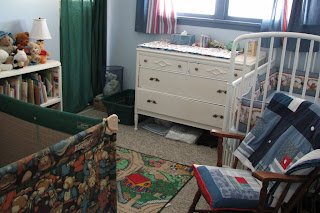 I must admit to feeling delighted to be able to casually mention "the boys' room." The change from it being "Little Man's room" to being "the boys' room" happened over night. Or to be more accurate: in the course of a morning.

You see, Little Man got out of the crib all by himself yesterday morning. I was trying to doze a little longer when I heard a suspicious thump followed by a bit of crying. Since it did not sound frantic and soon stopped, I didn't worry. After a very little while, however, I did hear a cheerful little voice just outside my door. Hmmmm... He was sure pleased with himself.

I prioritized rearranging to safely accomodate his new skills, and it became "the boys' room." On the left in the photo is the Pack-n-play that is Little Man's current bed. It's larger than the average pack-n-play, so there's still plenty of room for him. In addition the walls are high enough that he can't climb over them (yet), but even if he did, the fall would be much shorter.

On the right side of the photo is my spot: the little rocking chair I inherited from my great-great-grandma. And behind it is the crib that until yesterday belonged to Little Man. Now it is all made up with bumper pad, fresh sheets, and low rails just waiting for Brother's arrival. I might be jumping the gun a little to have it all ready two months before his due date, but I don't care. It's very satisfying to have it ready.

It's a cozy, crowded room full of little boy stuff, and even though it probably wouldn't make the pages of a home decor magazine, I love it!
Entry by Christina at 8:33 PM

Labels: around the house, family life

Yeah! That is exciting! I bet in another month or so you will be very glad that you redid the room now. :)

i had a climber too, she even tried climbing in the crib with her then infant sister!