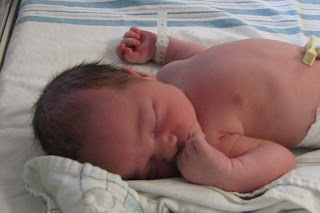 Last Saturday, August 15th, we had the joy of welcoming our second son! He was born at 12:58 p.m., weighed 7 pounds 15 oz., and was 21 1/4 inches long. As it was with our first son, it was a beautiful though difficult experience. But God was good and answered many, many prayers.
Our small town hospital has been slowly losing its family practice doctors, so our doctor is the only doctor left in town who delivers babies. As you can imagine, his work load is immense! He does have to take time off, though, so they have arranged for doctors from other towns to cover for him while he takes a couple of days off every week. However, there are a few times that other doctors aren't available, and during those times, anyone who goes into labor has to drive to the small city an hour north of here.
Well, guess what. Last weekend was one of those uncovered weekends. So I breathed through early contractions as we drove north! I got to deliver in a strange hospital with a doctor and nurses whom I had never met before Saturday. Even though there were moments of stress, overall we had a good experience. God gave us a lot of peace and helped us rise to the occasion. Plus He provided a nurse who was just about perfect for us. ; ) 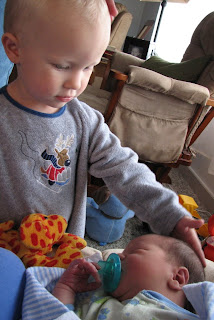 Little Man takes his responsibilities as Big Brother very seriously. He helps by bringing blankets and pacifiers and does so well at being gentle with Brother. He loves to narrate everything that Brother does, telling us when he is "tryin" (crying), "seepin" (sleeping), "op eyes!" (opening his eyes), "kick feets" (kicking his feet), etc. One of the cutest things was when Brother was crying during a diaper change, and Little Man explained to me that he was "sore" and advised me to use "powder."
It has been so delightful watching Little Man grow into more of a "big boy" this last week as he sees and interacts with his little brother. He has had a few emotional times, but they are to be expected. 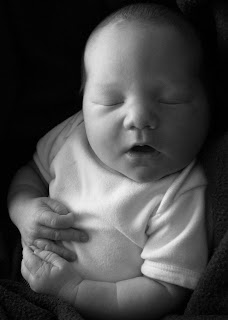 Brother has been a delightful baby to get to know. He loves to eat and quickly mastered all the required skills. Thankfully he also loves to sleep! He is already sleeping three to three-and-a-half hour stretches at night for which I'm so thankful. I wouldn't exactly say that I'm well rested, but I am certainly not suffering from sleep-deprivation-induced-insanity. ; )
I am going to close for now because I hear Little Man calling cheerfully from his room: "All done nap, Mommy!" Can life possibly get sweeter than it is right now with my three guys? 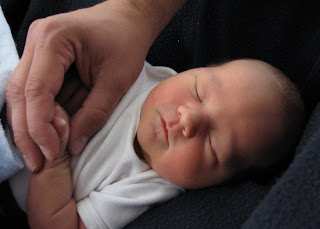 So many blessings, Christina!! What joy those two boys are bringing! I love the little story about Ian letting you know Liam needed powder :-)

Congratulations again! He's so precious! Oh dear, I am so glad the birth went well. I can't imagine how stressful that would be to have to sit in a car for an hour on your way to the hospital! I'm so glad the Lord blessed you with a great nurse :)

I can't wait until Zoe has a little brother or sister. I had hoped it would be soon but it looks like it's going to be another year before we can even think about that. *sigh*

i am still on holidays and got to randomly check my blog, congratulations on the healthy arrival of your second son. what a blessing!

Oh - he's perfectly beautiful!! Glad it all worked out! And he almost made my son's bd on the 18th. It's so precious to watch the older one love on the younger. Congratulations!!

Hey! Congratulations!!! What a beautiful little brother! I couldn't be happier for you and your family. I'm so glad you shared some pictures for us to Oooh and Ahhh over! :)