The past two Decembers Benjamin's side of the family has gotten together for an early "Christmas" the first week in December. Since the four siblings all live in different states, it is quite a feat to get everyone together. Last year we all met at his parents' house, and this year, we met in Arizona, where his oldest brother and his wife live. The following are a few snapshots of the highlights of our trip.
[Brother's first airplane ride] 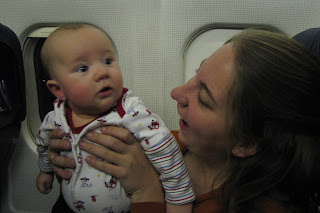 Because of the spread-out way Montana is, Benjamin's sister (pictured above) ended up flying with us even though she lived five-and-a-half hours north of us. It was so nice to have an extra pair of hands as we maneuvered our boys and many cary-ons though security and onto the airplane. Both boys did well on the flight and we arrived with minimal adventures.
[big family meals] 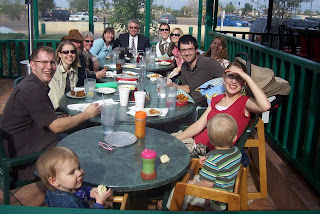 Eating good food and talking over it is a big part of my husband's family culture. We especially enjoyed eating a few of them outdoors in sunny, warm weather while our friends and family in the north were freezing in sub-zero (Fahrenheit) weather.
[catching up] 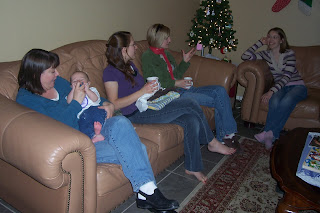 We stayed in the home of Benjamin's oldest brother, and it was delightful to be able not only catch up but also get to know my brother- and sister-in-law better. The rest of the family stayed in a near-by hotel. We had such delightful times chatting, cooking (and cooking, and cooking), playing games, and playing with the little ones.
[the three brothers] 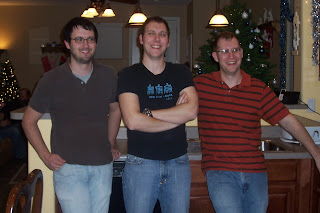 It is so fascinating (as an only child) to see my husband interact with his two older brothers. They enjoyed their share of catching up too.
[olive mill tour] 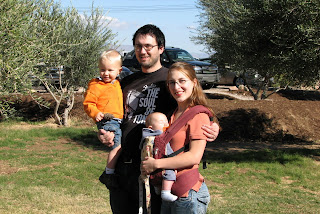 We had a big family outing to a nearby olive mill where we took a tour and learned about how olive oil is made, observed olive trees in the "show grove" (the main grove is not open to visitors for safety reasons), and ate a tasty meal prepared by the cafe on the grounds.
[cousins playing peek-a-boo] 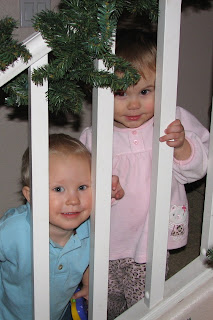 Little Man and Cousin (a few months younger than he is) had a delightful time playing together. They were practically inseparable the whole week we were there. They went to the park together, played with toys together, read together, ran together, and even got into mischief together.
[Cousin holding Brother] 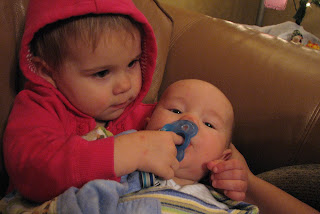 Of course everyone was delighted to meet Brother, and he got quite spoiled from being nearly constantly held. 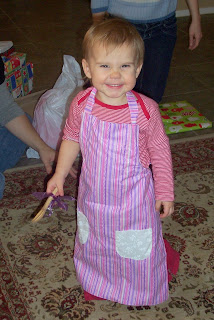 One day was designated as "Christmas," and we enjoyed eating a special breakfast and opening presents. My niece liked the pink and purple apron I made for her very much even though it's still quite roomy. I was delighted by her response.
[blissful grandparents with all their grandbabies] 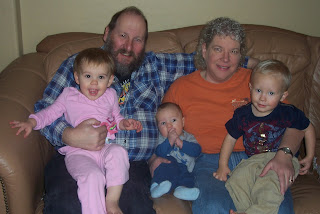 It was a relaxed and enjoyable trip (though somehow I came home exhausted). We all enjoyed ourselves immensely.
Entry by Christina at 5:00 PM

this looks like so much fun! and oh my. what cutie pie kids in your family, christina. i'm sure they're a joy to be around!

were you in Phoenix? our weather has been so lovely lately, i hope you enjoyed it!

sounds like a wonderful visit...it's so great you can get together like that and really spend time together. Haave a Merry Christmas.

Yes, we were in the Phoenix area. It was gorgeous!