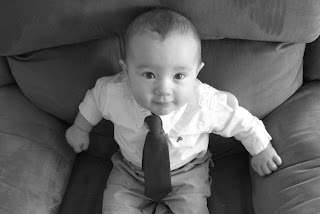 Yesterday was Brother's six month "birthday." I can't believe my littlest guy is already half a year old! Time has been going by all too quickly, and I'm stuck trying to enjoy moments that are here and gone at lightning speed; the cooing and giggles, the new skills and achievements, the cuddly moments and smiles. 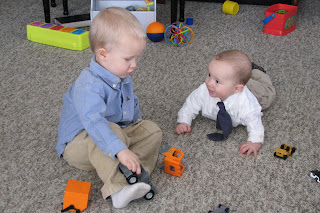 Brother's new accomplishments include but are not limited to:
~Saying "ma-ma" or calling Little Man when he is sad.
~Eating carrot puree (he's tried other things, but carrots seem to be his favorite).
~Reaching for toys.
~Chewing on them once he has them.
~Spinning in circles when he's on his tummy.
~Getting into a push up position and holding it in an attempt to crawl.
~Rolling across the room to get where he wants to go.
~Being fascinated by textures and sounds.
~Dealing with teething (his first tooth came in last week!)
~Wanting to wrestle with his Daddy and brother.
~Graduating from sitting in the Bumbo chair to sitting propped up by the Boppy pillow.
~Sitting up in the grocery cart instead of reclining in his car seat.
~Wearing a tie for the first time.
~And standing holding onto someone's fingers. 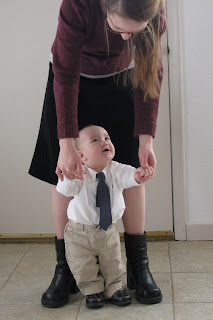 I am enjoying each stage as it comes and goes and am eager to see where the next month takes us.
Entry by Christina at 1:21 PM

Happy six month Birthday to your little guy! yeah on sitting up. and he'll be writing valentine's before you know it - in fact i wish i had a blog when my guys were little so that i could remember half the things they did and when. good for you for documenting this now - you will be so glad you did. Did you eat 1/2 a cake?

what a fun stage! oh. and his little tie.. how super cute is he?