I have been having such a hard time just sitting down and writing lately. I'm not sure why since I have plenty of ideas. We have been busy, though, and I think I'm already beginning to get to that restless part of winter where I just don't feel like settling down and focusing. Today, however, I'm going to write an overdue and probably much-too-lengthy update.
~I'm recovering from another cold. I'm so thankful that while I've been uncomfortable and cranky (sad but true), I have not been nearly as sick as I was before. I haven't developed any antibiotic-worthy infections, and with my entrance into the second trimester, I've been able to avoid throwing up anymore.
~Benjamin has officially accepted a position as part time worship director in one of our local churches. We finalized the transition from our old church to our new one near the end of January. The transition was gradual (we've been moving toward this since September) and peaceful, but we are still adjusting to such a significant change. 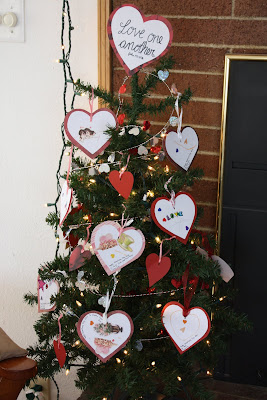 ~As the end of January loomed closer and I still had not taken down the minimal Christmas decorations, I decided to turn the Christmas tree into a valentine tree with the boys. Not only is it pretty and fun, but we are also going to use the valentines the boys made to give to grandparents, aunts, and uncles.
~I am teaching two flute students and am loving it more than ever. I'm hoping I will soon have a third, but we'll see what actually happens.
~Benjamin is planning on running a marathon in July. He has been busy training, planning researching, and collecting the necessary gear. Thankfully the weather has been warm enough the last couple of weeks for him to do some of the longer runs outside. 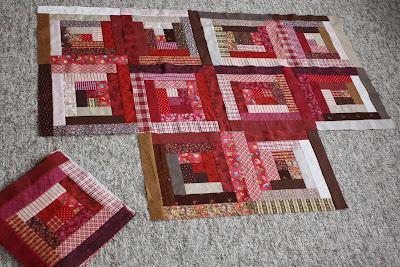 ~I've always wanted to make a traditional, scrappy log cabin quilt. The log cabin heart above is made of just ten of the eighty blocks I'll need. My current square count is thirty down, fifty to go. I'm loving how it's turning out! This quilt is going to be a wedding gift for one of my closest friends who is getting married in March, so I'm on a bit of a time crunch and am spending most of my spare time working on it right now.
~This week I made my very first Etsy sale to someone who is a complete stranger! I have made other sales, but they have all been commissioned projects from friends or friends of friends. I was so excited.
I think I'll take off for now. Brother is napping, Little Man is being sweet, and quilt squares are calling. : )
Entry by Christina at 10:04 AM

Congratulations to you and your husband on his new appointment. so glad you are feeling well and enjoying teaching. Love, love, love your heart quilt - this will become an heirloom! Stay warm and happy february to you too!

that quilt is gorgeous...I'm amazed at how that heart just is at the core of it. wonderful job. take good care of yourself...and that new life.