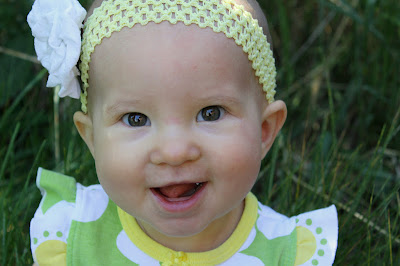 Our Little Lady has been ten months old for a little while now.
I always procrastinate on these posts
because they seems to sum up her brilliant little personality so dimly.
But here goes. 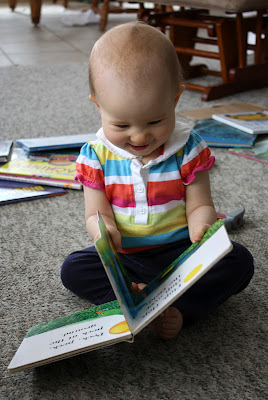 has discovered that she can turn the pages in books
(and naturally likes the paper ones better than the safe board ones)
loves to be in the middle of what her brothers are doing
(trains? cars? tools? blocks? bring it.)
makes anything into a drum
is almost obsessed with the fridge magnets

can get from lying down to sitting up all by herself
still isn't crawling but scoots rapidly around on her bottom
(she looks a bit  like a frog
as she propels herself around with little bent legs)
is enjoying exploring the house
(cabinets, closets, the rooms upstairs--nothing she can reach is safe)
is trying to pull herself up to standing

has been moved out of The Nook into her own room
is doing quite well with the change
(nap times have been a little harder since it's a noisier room,
but nights are going much better
now that we're not waking each other up) 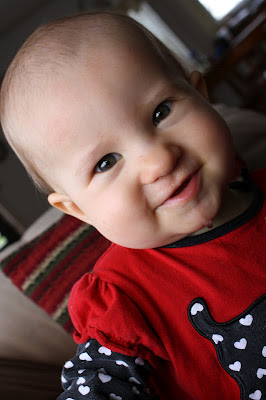 such a lovely summary of her activities and accomplishments. i was surprised by how much she looks like brother in the last photo. . .she so often looks more like little man!

Aww... she is just precious. Love the smile on her face as she is looking at the book! Too cute! :)

I just wanted to say that I love your kids little faces! They are super cute! :-)