In the small spaces between my business and illness, I have had time to work on a few projects. 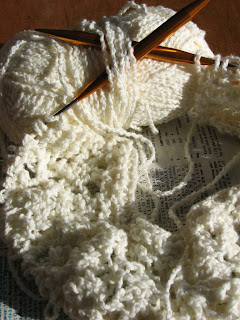 I've started my first following-a-pattern-to-make-something-other-than-a-scarf knitting project. And, in typical "me" fashion, I didn't start with something small and simple like mittens (or wait, maybe mittens aren't simple) or a hat. No, I started with a sweater. Granted, it is knitted on large needles and has short sleeves, but it's still a sweater. I had to look up YouTube videos to learn how to do some of the techniques correctly, but now that I know, I've been knitting away. If you were you be in the same room while I was knitting, you would likely hear me mumbling something like this as I worked, "over knit three over slip stitch knit two together pass slip stitch over over knit one..." My husband says he always thought that when little old ladies mumbled to themselves they were plotting the downfall of the world, but now he knows that they are probably just mumbling about knitting stitches. ; ) 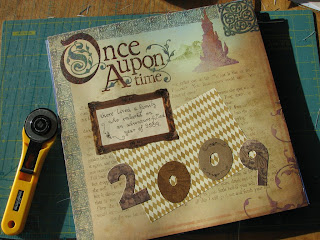 I've also made good progress on my parent's Christmas/New Year's gift calendar (the photo is of the calendar cover). I have the first six months put together (with the exception of the calendar part), and I would like to get a spiral binding put on it today. That way I can print out the calendar parts, attach them, and then give the calendar to my parents. More photos later...

This afternoon I am going to start teaching a six-year-old boy piano. I think that age is one of the funnest since every new thing is thrilling, but it can also be such a challenge to keep them interested and focused. I'm looking forward to it.

I need to take off to conquer my dishes and living room clutter!
Entry by Christina at 9:37 AM

beautiful photograph. i'm glad your project is moving along so rewardingly.

haha. i just made up that word and the spell checker doesn't like it.

Yay! You knit too! I too always try something complicated at first....a and then usually give up for a while until I work up to it in skill! :D

Your calendar looks great! You are very creative!