Yesterday we had a lovely, quiet celebration for Mother's Day. We had my parents over and had a scrumptious lunch and a relaxed afternoon.

Benjamin made amazing Chicken Marsala in honor of both mothers who were present: me and my mom. I feel quite confident in saying that I'm not just biased to say that his version was better than Johnny Carino's! Juicy and tender breaded chicken, sauteed mushrooms, and fettuccine smothered in a flavorful, creamy Marsala sauce. Wow, can he cook! 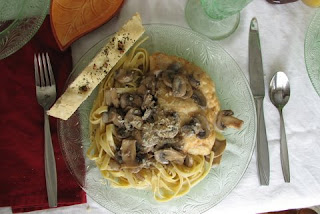 My mom brought a crisp green salad accented with beautiful (and tasty!) cherry tomatoes, which I did not get a picture of. I made homemade foccacia bread to go with the other Italian food. 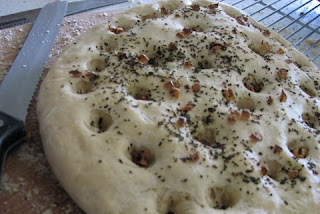 I also made brownies. I really cheated, though, since I used a box mix. It was my first time using a cake mix since my easy bake oven days when my mom would frugally give me normal boxed mixes to mix up in small portions instead of spending a bundle to get the ones specifically for the easy bake oven. The brownies did turn out being yummy, and they were delightful with vanilla ice cream. 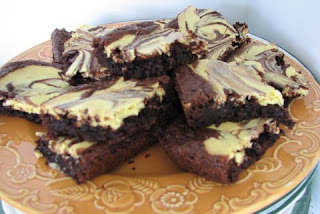 Poor Little Man was miserable all day long. The parts of the day that he didn't spend sleeping, he spent limply being held with his "bankey" and "beah" (favorite blanket and bear). 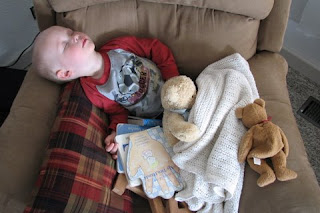 In addition to the yummy food that I got pictures of, Benjamin gave me a fragrant mother's day red rose and a card from all three of my guys (Benjamin, Little Man, and Baby). I was going to get pictures of them too, but I realized that I didn't have picture only after I sat down, and I don't feel like getting up. You'll just have to trust me that they are lovely too. ; )

seeing your foccacia loaf makes me want to make one! sounds like you had a great day...your son looks so cute asleep!

happy mother's day. Hope your little guy is feeling better. your meal looks like it was wonderful.

what's your recipe for the foccacia bread? it looks so tasty!

What a wonderful looking dinner!

And I can't believe how quickly your little man is growing! He looks so totally "out". :) What a cutie!

Hope you are all feeling better and rested before long. You are so right. It is no fun being sick when you are pregnant, let alone having a sick family to boot!

happy belated mother's day, christina! your meal looks absolutely scrumptious- how sweet of your husband to cook for you! and your little guy is such a cutie, by the way!