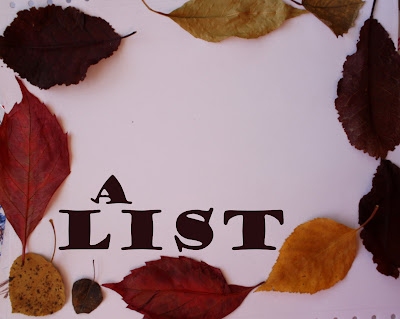 ~The cinnamon rolls baking in the oven right now smell so good.
~Sweet Pea is wearing a little pink sleeper that has a print of teeny-tiny baskets of flowers, butterflies, fruits and veggies, and the cursive words "sweet pea" all over it. How appropriate.
~The feeling of little arms wrapped all the way around one's neck and shoulders for an affectionate squeeze is one of the best sensations ever.
~I made flourless fudge chocolate chip cookies last night. They were intense and delicious, perfect for killing a chocolate craving. While they were tasty, and I'll probably make them again, I don't foresee them becoming a top favorite.
~I bought a stained glass leaf necklace last week. I had been looking forward to getting it for so long that when it arrived on a day when I was already emotional, not looking quite like I had envisioned it, I was really disappointed. After a little adjustment, I decided that I do like it after all. Silly me.
~I intended to write posts on Thursday and Friday about the other two leaf projects the boys and I made last week. Ooops.
~On Thursday Benjamin and I played classical flute-and-piano music as background music at the fundraising banquet for our local crisis pregnancy center. We pulled it off amazingly well considering the amount of practice we had. I love making music with that man. : )
~Speaking of music, the other day Brother was playing the piano (he makes some beautiful incidental music!) and singing when he announced to me: "I singing a New Song, Mom!"
~Benjamin is out in the mountains getting firewood with a friend this morning. I'm so thankful. Having a fire in our wood stove will make the coldest days this winter much more bearable.
~The timer just beeped for the cinnamon rolls. Gotta run.
Entry by Christina at 9:42 AM

Cinnamon rolls *do* sound good!!
That is a lovely necklace! I bet it looks beautiful :-)

<3 i'm rereading this list because i love it so much.