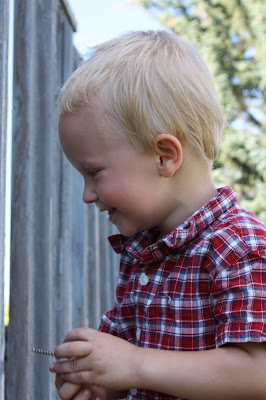 As we drove in the car one day, Brother was vocalizing. Little Man explained to us: "[Brother] is singing." Then after a pensive moment he added, "It's beu-ful." (beautiful)
I overheard Little Man instructing: "Sit still, [Brother] I am going to jump over you!" It's a good thing I was able to intervene because while Little Man's jumping skills are growing by leaps and bounds (quite literally in this case) these days, I don't think he is capable of jumping over his brother yet.
I was tucking Little Man in when he asked: "Will you snuggle with me? It might be special." 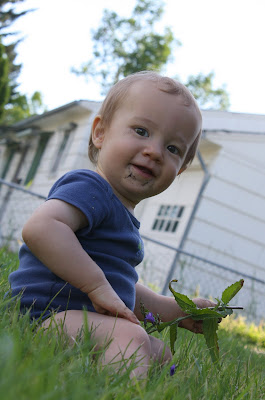 Brother has been saying "na-na-na" for banana and "Ka-kah" for cracker, waving and saying "bye," and calling Little Man "bwo-ver" (brother).
Brother seems to think the most exciting part of the day is when "Da!" walks through the door after work.
Brother has been trying to throw balls just like Little Man.
They both had hair cuts this week. It was Brother's first haircut ever. 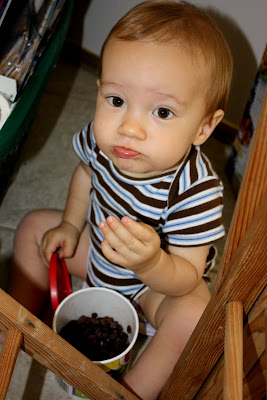 Our kitchen is in upheaval, as you may imagine, with the kitchen remodel we've been doing. One of my temporary storage solutions is putting our most frequently used foods in a laundry basket. One day I came into the kitchen after being in the other room for just a couple of minutes and found Brother very happily raiding the raisins. When he realized I was looking at (and taking pictures of) him he looked slightly startled promptly tried to put the lid back on with a "who, me?" look.
Entry by Christina at 10:00 PM