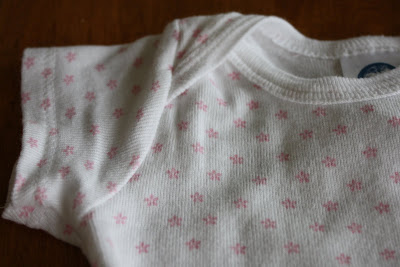 girl! Yes, just over two weeks ago at our 20 week ultrasound we found out that we're going to be having a little girl! We are so excited. Benjamin's heart is already melting at the thought of being Daddy to a girlie, while I've already begun to collect frilly, flowery little clothes during my thrifting outings and making "pretty girlish" things (as Little Man says).
When we told Little Man that he was going to have a new little sister, he thought about it for a minute, and said: "That sounds good." He's actually old enough to understand a bit of what's going on this time and is a lot of fun. Just a couple of days ago, he started rubbing my belly and saying that he can feel Sweet Pea. Brother, on the other hand, still responds with an emphatic "huh-UH" or "no" when we try to talk to him about the new baby and about being a big brother. He'll come around eventually, though, and join the rest of us in our excitement. : )
Entry by Christina at 2:45 PM

HURRAY!! I am so excited for you! It will be fun to have a girl mixed in with your boys! :) We'll have to swap stories of how the boys differ from the girls. :) Enjoy shopping for girl clothes! I know we are! :)

Congratulations on a girl! Just wait and see how protective your boys are of her as she grows!

I had a girl after two boys... oh the fun you will have! Congratulations!

oh how exciting! what a blessing. She'll have two big brothers to look out for her and protect her. You're going to have fun dressing her for sure!