Today I finished sewing together my log cabin quilt top, ironed it, pieced the backing, and ironed it. If you think that's not very impressive, you've never tried ironing a 113 inch by 98 inch rectangle of fabric before. It's a very worthwhile pain. I'm so pleased to have that part of it done! It was incredibly satisfying to fold up the quilt and backing and bundle them up to go to the quilter.
In celebration, I decided to write recipe reviews! Yes, it's a little random, but it I find that if I over-focus on one project it becomes stale, and what better way is there to distract myself than by thinking about yummy food? : ) No, not really. But food is delightful, and I've enjoyed trying a couple of new recipes lately.
. Enter the Cream Cheese Brownies: 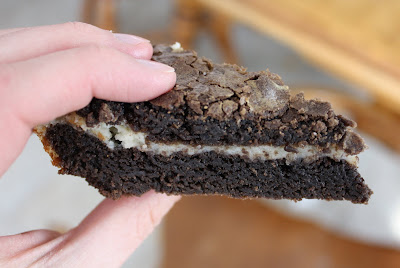 The recipe: I have never had good success with making brownies from scratch. I have even managed to make brownie brittle (it was just like chocolatey peanut brittle without the peanuts!) while I thought I was following a brownie recipe. That being the case, I generally stick to making the cheater box kind of brownies. A few days ago, however, box brownies were just not going to cut it, so I thought I'd give it another shot. Enter Cream Cheese Brownies.
The mods: For once I didn't mess with the recipe (guess I was too scared of another brownie brittle incident) other than to half it for fear of making a little brownie piggy out of myself. ; ) I think I may also have not swirled the top two layers as much as I was supposed to.
My impression: They turned out! And they were everything I dreamed they would be...sigh...salivate...sigh...
The recipe: The other recipe I tried recently was Roasted Asparagus with Balsamic Vinegar (sorry I have no photos for this one). We have been buying a lot of asparagus when it has been on sale lately, and I was getting tired of my usual steamed asparagus.
The mods: I added a grating of fresh Parmesan which was just lovely.
My impression: Yum! Roasted asparagus has a nice texture as well as more flavor than steamed asparagus, and the balsamic vinegar added the perfect, simple extra touch that was needed to finish it off. I'll definitely be making this again!
Entry by Christina at 10:30 PM

OOh I might have to try the asparagus recipe. I am only an asparagus fan if the sauce is good!

and the brownies? those would just be dangerous! I could consume the whole pan!!

Those brownies look delicious! I love roasted asparagus, amazing how much a different method of cooking make something taste isn't it?

Congratulations on the completion of your quilt top! It is a beautiful quilt, and even more so, in that you are generous enough to give it away :) I am finally "finishing" the hand quilting of a 25 year old quilt project of mine, so can certainly appreciate the timely finish of yours!