I got a set of ten little pots of Tuilp brand soft fabric paints for $2.99, and like any good Montanan I already had freezer paper on hand.  I used paint brushes I already had and solid colored shirts from the kids' drawers, so in addition to being super-fun, freezer paper stenciling was thrifty--the best sort of project! 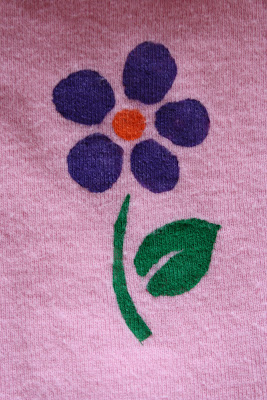 I free-handed a cute flower design for a  girly onesie for Sweet Pea. 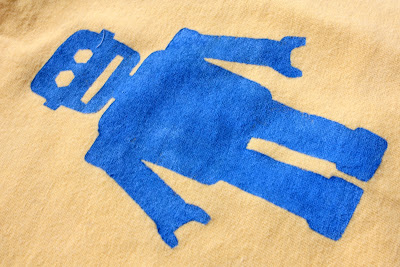 I used a fabulous robot template
I found a while ago for the boys' shirts.


I wish I had taken more photos of the process,
but I was having too much fun.

Plus I had two small admirers
who were extremely eager to see every step
and who wouldn't have been thrilled with photo delay. 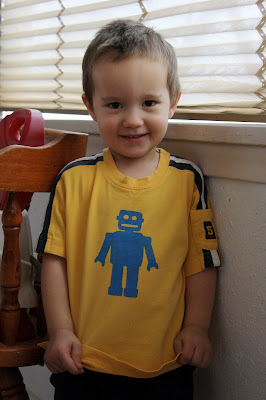 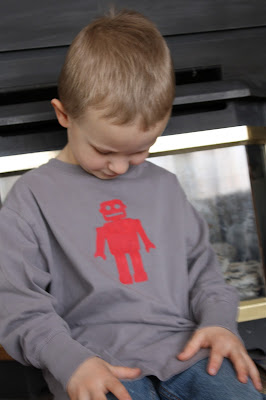 And Little Man chose red.
(Yes, I know it's blurry;
he was flapping his arms and bobbing his head,
making it difficult to photograph him.
Did I mention
that he's being camera shy right now?) 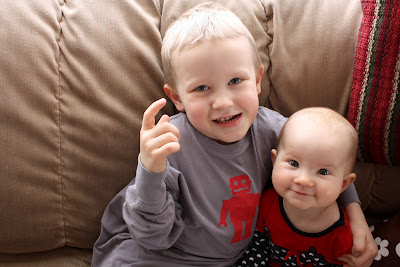 Apparently the camera is easier to face with your sister by your side.

The boys are delighted with their "new" robot shirts (Sweet Pea hasn't really expressed an opinion about her flower), and I've definitely gained some awesome points for making something so, well, awesome.  I'll say that this experiment was a smashing success.
Entry by Christina at 6:00 AM

John Samuel was looking over my shoulder as I was reading your post....he's so going to make a lego shirt like your boy's robot shirt! I'll be out getting tulip paints to go in his Easter basket this weekend! Your shirts turned out wonderful! Thanks for sharing! Oh and Happy Easter!!!

such a great project!!!