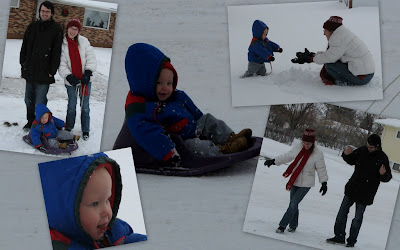 It finally warmed up enough to take Little Man out to play in the snow! We had a ton of fun pulling him around the street in his little sled, introducing him to the snow, and making snow angels. 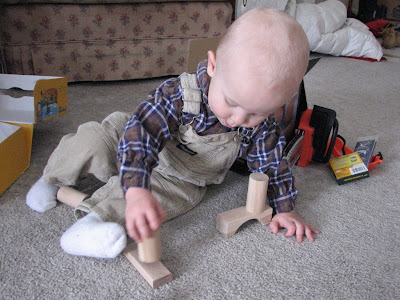 We gave him a set of classic wooden blocks for Christmas; he likes them and can already stack up to three on top of each other. 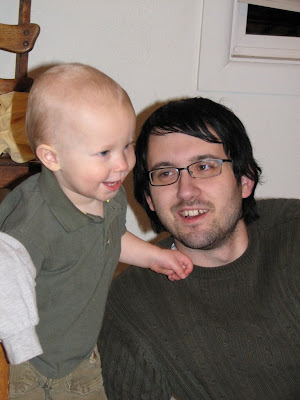 My dear guys taking a breather after wrestling. 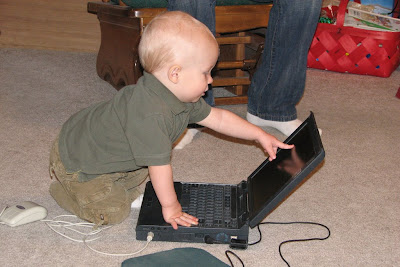 My parents gave Little Man an old lap top they had that was collecting dust, and he loves it. He has been enjoying having a computer that he can touch, "type" on, and play with the mouse. It has been a lot of fun.

We had a relaxed, laid-back day with my parents that was a true relief from the crazy busyness that has been going on lately. I hope that you had a joyful and peaceful Christmas. What are some of your treasured moments from the holiday?
Entry by Christina at 11:03 PM

Very very cute pictures! Your little guy is the sweetest! :)

I'd love it if you visited me! :) www.hersoutherncharm.blogspot.com
xoxo,
Jennifer

Well, thank you! :) I do love decorating. And the buffet is one of my fave spots, too! I've got so much more decoration pictures.. I didn't even do the upstairs! ha ha. Maybe I'll save that for next year. Have an awesome day!

Adorable photos. We did get a good amount of money for Christmas, mainly because I have a very generous grandfather. :) Our daughter also received $15 so I bought her another toy...probably should have bought her clothes. lol. Oh well!