I have a hard time figuring out what kind of gifts to make for Benjamin.  He doesn't love cluttery, purposeless items, he is picky about his clothes, and hobby-related items can be hard to make.  Happily for me, though, over the past few years he has added golf to his list of hobbies (music, gaming, writing, golf).  I can't build a guitar, amp, or piano, code a computer game, or plant inspired phrases in his brain, but I can make golf towels!  Perhaps the best thing about golf towels is that they'll look pretty grungy after one season of golf, so if he likes them, I can make some more next year! And the next, and the next, and maybe even the next. ; ) 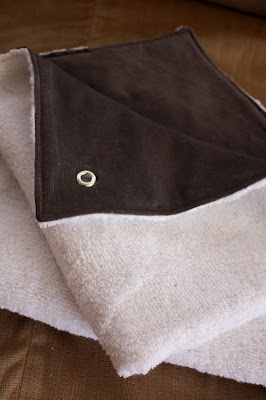 I found a tutorial (which I followed pretty exactly with the exception of the corner pocket which I left out), gathered supplies, and after less than an hour of sewing, I had two terry-cloth-and-corduroy golf towels.  I even installed grommets in one of the corners of each towel, which was a first for me.  They look nice, and I hope he'll enjoy using them next summer!
Entry by Christina at 6:00 AM

Incidentally, they might go nicely with your bag as well...

Wow this turned out so great. I bet he was thrilled when he opened this gift!