When people know that you sew, it seems like you end up being given fabric. I do, at least. Sometimes it's junk--itty bitty pieces that you could only use if you made miniature quilts (I don't) or hideous prints that were surely never in style. I only suffer minor qualms as I throw that stuff away. Sometimes it's something gorgeous that just takes my breath away--prints that are just my style, fabrics in exquisite colors, or flawless vintage pieces. But most of the time the fabrics I'm given are somewhere in the middle--reasonably sized pieces that have reasonable prints that can be made into something reasonably nice.
A couple of weeks ago a dear lady who is like a grandmother to me brought two bags full of fabric for me to use that her son-in-law's cousin was getting rid of. The son-in-law's cousin was a smoker, so my grandmother-friend washed all of the fabric, painstakingly ironed it, and folded it neatly for me--an act of love.
One of the pieces of fabric she brought for me was a print that I would have placed in the "reasonable" category but that my boys both placed in the breathtakingly amazing category. It was a little less than a yard of a deafeningly bright, large dinosaur print. (Can you say 90's?) Anyway, both of the boys adored it, and dragged it around the house until I threatened that it would become unusable unless they left it alone.
I knew that I had to make something out of it for both of them, but the small yardage and the large print had me stumped until my mom suggested pillow cases. Ah, ha. Yes. (My mom is pretty, brilliant, by the way.) I had just enough dinosaur fabric to make two pillowcase fronts to which I added solid navy blue backs and complimentary bands around the openings. 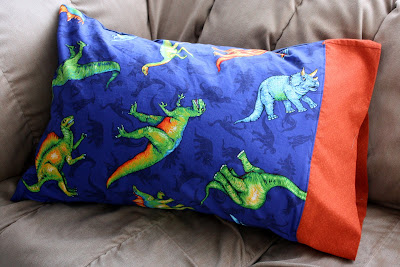 Little Man is still crazy about orange, so his pillow case's accent color was an orange print left over from his quilt. I can't help but feel badly for that poor decapitated brontosaurus, but there was really nothing I could do about it (yes, I tried...). 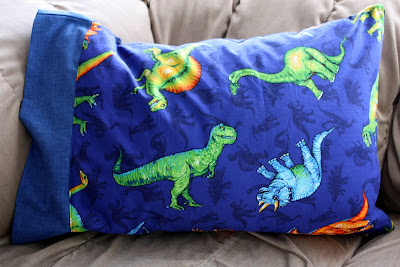 Brother's pillow case is accented with a more mellow blue band. That blue fabric actually has a nifty texture that doesn't show up very well in the photo. 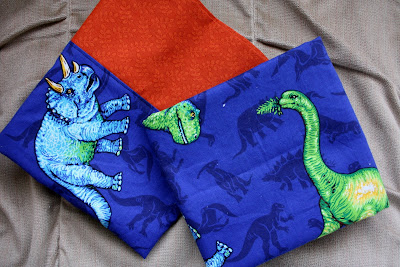 I am not a huge fan of the dinosaur fabric, but I can't wait to see my boys' responses when they open these pillow cases on Christmas. Hehe...they'll be so delighted!
(If you want to make some of your own wild pillow cases or even some nice, mellow ones that match your decor, this is a good tutorial.)
Entry by Christina at 6:00 AM

Thank you so much for posting the tutorial for pillowcases. I recently bought several pieces of fabric to make pillowcases for my grandsons and was looking for an easy pattern. By the way, my little ones (ages 2,4,5 and 6) would absolutely love that dinosaur fabric!

:) they turned out so nice and cheery! i'm sure any li'l boy would love one!