I have finally been able to set aside some time to work on my sewing projects, and I completed three this past week! First on my priority list was finishing Brother's "big boy bed quilt." I started it quite a while ago when were first transitioning to his toddler bed. Due to irksome back pain, delightful custom projects, and general lack of motivation, though, it was on the back burner for several weeks. It felt great to finally finish it for him! 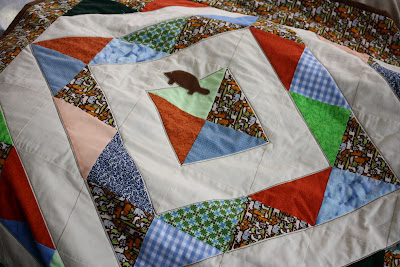 Brother is pretty much obsessed with blankets, often trying to carry four at once, and protesting in great dismay when he can't quite manage it. He's also crazy about animals of all sorts. I was delighted to combine these two loves by using the Alexander Henry teeny tiny 2-D zoo print in chocolate as the main print in and inspiration for his quilt. The rest of the quilt is scraps from my stash (modern and vintage) in greens, blues, and oranges and natural muslin. 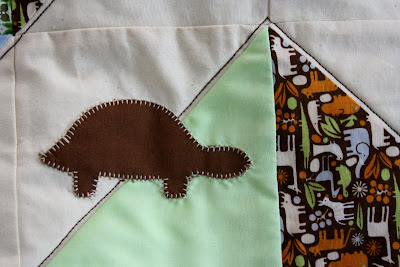 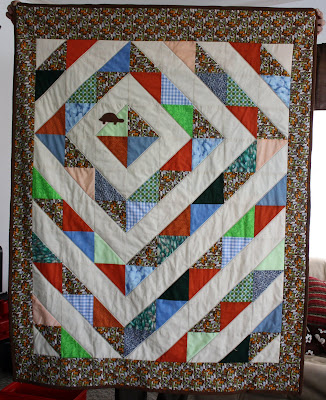 I'm so glad that I chose to arrange the triangles into asymmetrical diamonds instead of the zig-zags I originally planned. This quilt turned out being a little big for a crib quilt and a little small for a twin quilt. At first I was disappointed, but the more I look at it, the more I'm just pleased with how it turned out. After all, its smaller size will make easier for small arms and short legs to carry it along with three other blankets and a couple stuffed animals, right?

Linking up to Studio Sneak Peek!
Entry by Christina at 8:24 AM

It's beautiful! I love your fabric choices.

right ... love the turtle and the blanket ... your brother may need a blanket bag soon. :)

It is sure to become THE favorite...I like that off centered diamond design as well...

Aww... that is so cute! Beautiful job Christina. I love the little turtle applique! I'm sure he loves it. :)

This is so beautiful. What an incredible amount of love is in that blanket. lucky boy!

I love the diamonds! How cool!

So sweet. The turtle really makes it special.

Christina... this is a fabulous quilt! I love everything about it- the fabrics, the colors, the composition and that sweet turtle. awesome!

LOVE the turtle applique! It is so cute! You did a great job on the quilt. I am coming over from last week's Sneak Peek Friday since this week's wasn't up yet. :)