Father and Son and a few random ramblings 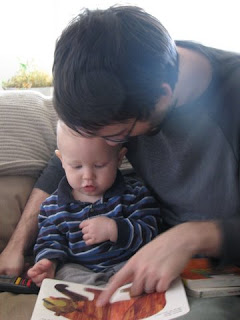 I love taking pictures of my husband and son together. These are really back lit (though I'm not going to complain because I love my huge windows that let in the sunshine in), but I wanted to share them. 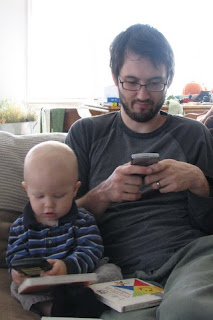 My husband's work provides him with a blackberry so that he can be available to receive his phone calls and e-mails anywhere there is cell reception. The blackberry has been an object of interest and desire to Little Man for a long time. Well, recently he/we discovered that our hand-held Yahtzee game is almost the same size and shape as the blackberry, has a screen and buttons like it, and even makes little beeping noises when the buttons are pressed! Voila! Little Man now has his own "blackberry". See them working so intently with their technology? ; )

Little Man has been going through a cuddly stage. I've been enjoying it so much. This morning after I changed his diaper and dressed him, I was sitting on the floor, and he picked up a book and came and sat himself in my lap! He hasn't done that before, but this morning he did it several times. I was so happy.

The cuddliness doesn't work so well while trying to cook, though. My mom has a sling that I am going to try to borrow since I think he can sit on my hip in it, and I can have both hands free. I hope it will work better than the back-pack carrier for this sort of thing. I would like to give it a try though I may go back to the high chair and crayons again. We'll see.

After making a quilting mistake that will take quite a bit of ripping out, I decided to stop for the evening. I am tired enough that I was afraid that I would keep making mistakes. I did finish Mansfield Park, though. It made a whole lot more sense this time, though I enjoyed it the first time too. And now I'm blogging, though I think I might be about done with that for the evening too...

So good night.
Entry by Christina at 9:12 PM

too cute!! I love the "blackberry" picture. Andrew loves any techy. We should get him his own little remote control or little cell phone to have! he sure loves them.

This is awesome! What cuties. My husband and son do the same thing... We have substitute phones, remote controls, etc so that everyone gets a chance to push those buttons! We also have had a real stereo in my son's room since he was a baby. He now knows how to work it from top to bottom (he's 3), and it is his absolute favorite toy.

Thanks for stopping by my blog and your kind words!!!! Makes my day. :)

What great pictures! I love when my husband and son do things like that too. Just wait...it really gets better as they get older (the little boys I mean, not the big ones) and can actually imitate them on so many levels. My favorite - when my son calls me sweetie just like his dad!