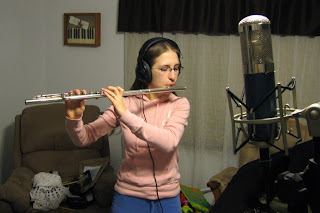 We are making a short Christmas CD to send out this year instead of a card. We are planning for it to have 5-6 tracks and hope to get it out the first week of December (okay, update: my husband just read this over my shoulder and said, "5-6 tracks!?!? I was thinking three!" Hmmm. I think a communication short has occurred.) We have two tracks done, which is good, but we still have so many more to go (update: maybe only one more to go)! ; )

Today we recorded me playing a flute duet with myself. ; ) Yep, that's right. I recorded and re-recorded, and re-recorded some more. One part on top of the other. It was tough to get the timing right, but it's done now! My ears are so not processing anything anymore. 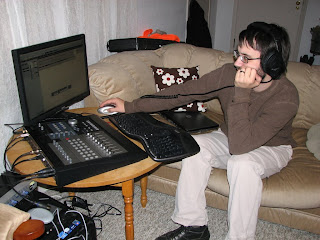 We moved our recording operation upstairs temporarily since the acoustics are much better in the living room than they are in the basement. I will have a bit of a challenge keeping Little Man out of it, but that's all right. The better sound quality will be worth it.

I am really thankful for my producer-husband who is really patient with my timing glitches and who copies and pastes bits of music into their proper places. ; )

We had so much fun. I can see why some musicians like to record so much. In some ways it is more demanding than live performance (every little mistake is recorded "forever" instead of being a passing glitch). Yet in some ways it is easier because you have so many times to try to get it right, and sometimes you can take the good sections from two different takes and paste them together, omitting the bad.

That is really neat Christina!! I love the creativity and artsy-ness of it all! :) What a wonderful idea... wish we could all hear it. Any way to post a clip?

I was thinking about trying to. Or at least post a link to a clip...I'll have to talk to my ultra computer-savy husband to find out how exactly. ; )

I will try to get the songs uploaded as YouTube videos so that they can be embedded in the blog. I will work on that today.

OK, the songs are uploaded to my account on YT. You can go see them there if you want (username is 'bfpowerQQQ')but I think Christina is going to post about it.