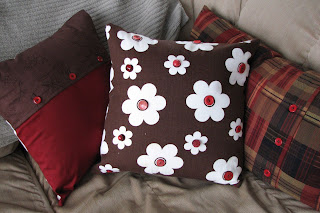 This afternoon I went out and bought pillow forms for my two new couch pillows, and now I can post pictures of them! The only problem I'm facing is that both sides are so cute, I don't know which one to face out when they are sitting on the couch. The one on the left is the back of the two new matching pillows. The one in the middle is the front. I love how the antique buttons sewn in the middle of each flower turned out (my mom sewed them on for me). And the oblong plaid pillow is one of a pair that I made over a year ago. I like how they turned out. 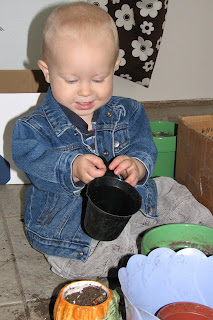 We bought a bag of potting soil while we were out and about so that I could re-pot a few of my root bound house plants. You can see from the picture how much fun little man had helping me. 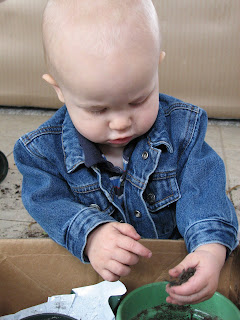 He loves dirt but usually isn't allowed to play with it since that means digging it from around my poor little plants and scattering it all over the floor. Today was an exception. He found a pot that had some dirt left in it and had fun experimenting with it trickling through his fingers.

As the afternoon has progressed, I have gotten a yucky headache. Which is why I'm indulging in afternoon blogging instead of doing other stuff. I still need to finish dinner in addition to having some other things I'd like to take care of tonight, so I will now diligently go take care of them headache or not.

I too came down with a yucky headache this afternoon, I indulged in a long hot bath. :)

I'm thankful I have enough leftovers from last nights dinner for dinner tonight because the bath pretty much only relaxed me, no headahce relief there. :(

Have a great day!

oh and being friends with hubby is the best!