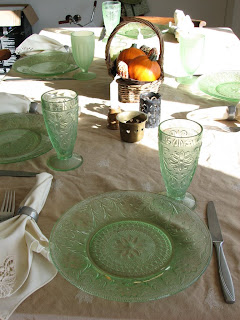 Yesterday, Thanksgiving Day, was a peaceful, joyful day. (Really, it was. Even the cooking and dishes didn't get out of hand!) I enjoyed it a lot.

In the morning my husband and father went hunting but came home unsuccessful. They decided to go sight in the guns, and they have much better hope of success next time. ; ) My mom came over later in the morning, and we peeled and cut potatoes, prepared vegetables, chickens, gravy, sweet potatoes, and stuffing. We were able to do it in a timely way that eliminated stress. I enjoyed being able to visit and to have a lot of help with the dishes and cooking.

We invited several people from our church over who don't have much family in town, but only one ended up coming. She made delicious crescent rolls and was a lot of fun to visit with after dinner. 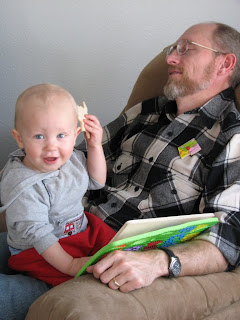 After getting up early and then having an especially large lunch, my dad fell fast asleep in the easy chair--while Little Man was playing in his lap! I had to laugh when I saw it, and hurried to grab my camera. 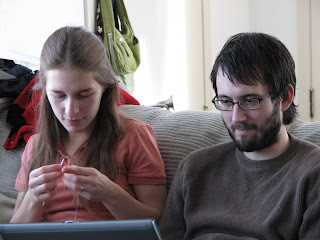 My husband played a few computer games and then fell asleep on the couch to catch up on some much needed rest.

On a whim, I decided to work on these pretty crocheted leaves made of wire. I used finer gauge of wire and a smaller crochet hook, so mine turned out a little more delicate. I have several ideas for them floating around in my head, and I even made a few pairs of earrings out of some of them last night. More on them later, I suspect.

My mom managed to escape unphotographed. We'll have to make sure we get some photos of her next year. ; )

In the evening we went over to some good friends' house for pie and coffee. And football. Watching it, that is, not playing. And video games.

When we came home, my husband and I stayed up way later than we maybe should have just talking and talking. Even though I've been a bit tired today, it was so nice! No regrets.

I am thankful that I was able to avoid being stressed throughout the whole day. It really is a lot better that way!
Entry by Christina at 8:11 PM

Those dishes are so pretty! How nice you all had such a peaceful holiday. I enjoyed reading this post.