our trip: the in-laws'

Have I ever mentioned on here that I have terrific in-laws? Pretty much the best a girl could ask for. : ) When I hear people bewailing the sad state of their relationship with their in-laws, I am sympathetic but can't really identify. I am so thankful to be friends with my husband's family!
On the way to Colorado, we stopped at Benjamin's parents house late at night, slept hard, and took off in the morning. Thankfully we were able to stop at their house on the way home too. We were able to spend Sunday evening and 3/4 of Monday with them.
The bulk of my nasty flu hit my while we were at their house, so I spent most of the time there sleeping, moaning, and generally out of it. I did manage to muster enough energy to go to a thrift store on Monday morning where I was able to get a couple of nice things for myself as well as a stack of stuff for the boys all at half price (they had a special Memorial Day sale). After that I returned to their house and crashed again. They were oh, so gracious and understanding.
My sister-in-law did get some good photos with my camera for me for which I am thankful. Here are a few of the best. 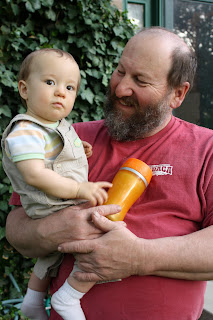 I love this shot of Brother with his Grandpa. 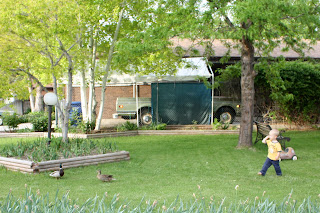 Benjamin's parents have a duck couple who has taken up residence in their yard. Little Man loved watching them and throwing pieces of bread to them. 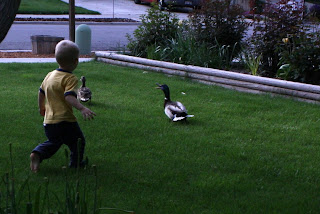 He also thoroughly enjoyed chasing them. They fled the premises quacking, though they did return later when he wasn't around. 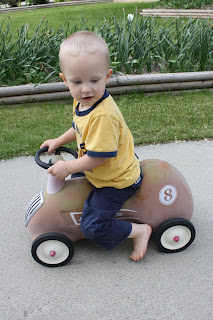 But perhaps the highlight of the trip (other than seeing his grandparents and auntie--he had been eagerly talking about and anticipating seeing them for days) was the new-to-him "bike" that Little Man's Auntie found for him. Now he is looking forward to the next visit, and so are we.
Entry by Christina at 1:12 PM