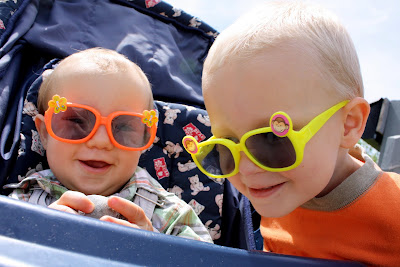 [Brother and Little Man sport their party-favor shades.]
Today I thought I'd start something new. I'm going to try to write a short and sweet post each Friday about the cute or funny things the boys say and do throughout the week as well as any big milestones that they reach. I think it will be a fun way to document those moments that fly by all too quickly!
~Last weekend Benjamin and I enjoyed sleeping in. When I got up, Little Man informed the that Brother had woken up and that he had given him three toys to cheer him up. I was pleased with his kind helpfulness and went in to get Brother up. This is what I found: 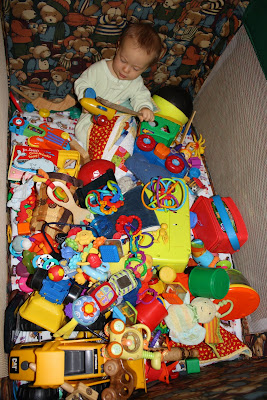 The entire contents of the big toy basket and the baby-toy bin (plus a couple of extra big trucks) were in Brother's pack-n-play with him. He was oh, so happy with the arrangement, and Little Man was pleased to have helped!
~Brother took his first step all by himself! He was trying to get to his daddy.
~When he heard Benjamin commenting to me that the boys really look a lot alike only with different coloring, Little Man exclaimed as if he was an expert: "Yes! I have blue hair, and [Brother] has hazel hair!"
~As I was driving down the road with the boys in the car, Little Man asked: "Where's Daddy?"
I answered, "He's playing golf this evening."
Little Man then further inquired, "Is he hitting range balls?"
I said, "Hmmmm, I don't know. Probably not."
"I think he is," Little Man replied with great certainty.
~Brother successfully climbed two stairs at some friends' house.
~Little Man was eating a tasty breakfast and said, "MMMMMmmmmmm!" When Brother heard it, he lit up and copied: "MMMMMmmmm!"
Entry by Christina at 9:30 AM

I love all the toys in the pack and play! What a great big brother! :) Sounds like your little one loves his big brother very much! :)

such precious times you have at your house. I love all the toys in the pack and play...so funny. wonderful stuff!

I love that photo! My four year old has been doing this very same thing with my almost two year old! :)