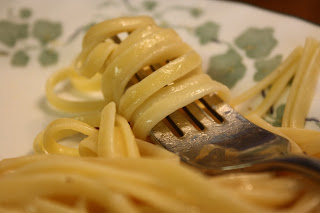 On Tuesday evening I was battling flu, so we weren't able to go out as we had anticipated. This left a gap in the menu plan, and since I wasn't feeling like cooking, Benjamin did. I think that I've mentioned before that he's an amazing cook, so when he cooks, it's always a treat.
This time he chose to make a new recipe: Cacio e Pepe Pasta. (I think it means Cheese and Pepper pasta.) It was an amazingly easy recipe, and as I recall Benjamin didn't really change anything about it except halving the recipe. It was also amazingly delicious. I expected it to be rather bland but instead found it to be full of rich though subtle flavors. I certainly expect to make this again and think that it would be tasty paired with some lightly lemony fish. 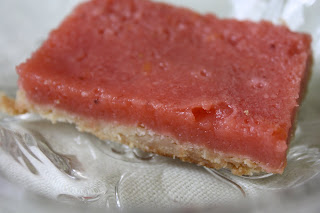 Last week I also tried this recipe for Strawberry Lemonade Bars. I love the combination of the shortbread and the custardy topping. I also love how pretty these cookies are and how each bite just screams "spring." I think that because of their color and unusual flavor, these would make nice bridal or girlie baby shower treats. I suspect that these will become one of those make-once-a-year recipes that are too good to not make again but not good enough to mix up a batch just to satisfy a craving.
The recipe instructs to wait until the cookies are cool to cut them, but I was anxious to try some, so I used a spoon to sample a couple of bites (cook's prerogative, right?). I also gave a bite to Little Man and shortly afterward went into the other room for a couple of minutes. When I came out, Little Man was acting guilty, and I soon realized why. He had pushed a chair over to the counter and helped himself to a generous amount of topping, scraping it off of the crust. Obviously this recipe was a hit with him in spite of its pinkness. 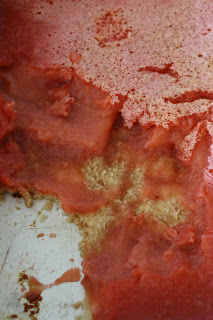 Looks like you're making good progress on the spring cleaning. Good for you! I need to follow suit and get some stuff cleaned out and stored away. It's a lot of work but so worth it!

Those strawberry lemonade bars look amazing!! I may have to try to make those... :)